For the first time since 2014, Modi government seems to be on an offensive against the anti-national elements. Although some vigour was shown to cut down the international NGO funding but that happened behind the doors and the message did not travel fast and wide with the result that the anti-nationals got some time to put their act together and mount one attack after the other- intolerance debate and award wapsi being prime examples. Modi government seems to have now finally woken up from its deep slumber and did not avoid acting on anti-national activities in its backyard. The complete silence on Malda had otherwise put even its best supporters on a backfoot.

There are two arguments doing the rounds on the SM lately and need instant attention. And both of them are the result of lack of understanding on these issues by the RW. Slapping of anti-sedition laws on some JNU students have caused a furore among their benefactors, which was more or less expected but a lot of self-proclaimed RW persons also seem to be confused in their response. There are many inter-twined issues here but lets look at confusion of RW. 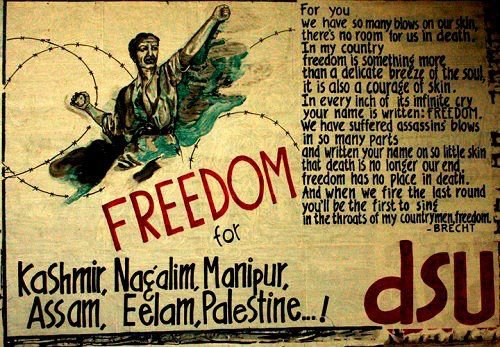 The first point that is being raised in defence of anti-nationals is that these students raising the slogans in JNU form a fringe minority on the campus. The left will obviously raise this point but some on the right too have bought it without any background check. JNU has been the hotbed of anti-national activities since the time of Naxalbari movement and this was not a stray incident. Look at the poster above, which forms the normal discourse inside JNU campus. Can anyone in his sane mind claim that this agenda is driven by fringe elements? The arrest of the president of JNU’s student union, Kanhaiya Kumar, should clear anyone’s doubt on the acceptance of this anti-national behaviour on the campus. Had it been otherwise, the president of student wing would have been much more careful before lending his support to such secessionist sloganeering inside the campus. The support these students got from their faculty members should clear any other remaining doubts about the support for such activities in JNU. Fact of the matter is that it is the first time that media has decided to raise this issue otherwise support for such anti-India views has been mainstream in JNU campus under SFI and AISA, the left wing organizations which have controlled the student union for most of JNU’s history. So, it would be completely wrong to push this issue under the carpet by claiming that these are fringe elements on JNU campus.

The second issue which has found more resonance among the RW is that the sedition laws are illiberal and have colonial legacy.

If there are non-violent,non-terrorist activists, liberal society should tolerate them.Unwise use of sedition law. https://t.co/wDbE0XeLWX

Did you hear even a single voice from the left give similar analogy in favour of Kamlesh Tiwari’s freedom of speech when he was hounded by using another British era law? The hate-speech laws are even more abominable and much more difficult to prove in court than sedition laws. Also, both of them are British era laws but hate-speech is misused rather frequently to support Islamists and leftist agenda, while the sedition law is hardly ever invoked. Does this mean that RW should take a moral high ground and become the sole guardian of liberal ideas in this country and give free pass to the leftists to carry out their agenda? Probably they need to learn the rule of golden silence from their leftist compatriots.

There is no reason for RW to be apologetic about this issue and should embrace sedition laws, specially in cases where the left wants to compromise with the territorial integrity of India. No country can allow free speech on secessionist agenda, specially when such elements wilfully play as useful pawns in the hands of foreign enemies. If anything, the RW should use this issue to highlight the hate-speech laws and brow-beat the left on their duplicity. It is high time that RW learns some realpolitik from the left and stop taking moral high ground on each and every issue. The public mood has backed the action of slapping sedition laws against these parasitic students and Modi government should use this opportunity to further increase the pressure on leftist groups and build on its offensive posture. The intolerance debate has been in limelight for too long, so it is high time to show some real intolerance.

But whether slapping charges on students, who are mere pawns in this game, serves the RW purpose is a valid question that one should ask. The real masters behind the Idea of India brigade are not really affected by arrest of some youth, who were in any case disposable assets. But this action at least sends the signals that RW is on offence now and would not mind some collateral damage. If Modi thinks he can win the next elections by playing Goody Two Shoes, then he is under grand delusion.

In the next article we will discuss about what should be the future course of action. Till then read this and come up with ideas on how to take this battle to its logical conclusion.

Has bjp betrayed Hindus or it is just incompetent?