GoI under PM Modi cracked whip on foreign funding of NGOs last year, which culminated in the orchestrated attack on GoI by local and foreign media through highlighting non-existent intolerance debate in the country. Fake Church attack stories were planted to tarnish the image of the government. A large number of these NGOs with foreign funding are engaged in subversion activities in India and a significant part of this foreign money is channelled through organizations related to Church. So fake Church attacks not only generated large donations for them worldwide, but probably also made GoI go softer on conversion business of Church. It raises the question whether Hindus can somehow manipulate the Church mafia for its own benefits.

The manipulation in this case means using the Church money to fund conversion of Muslims into Christianity. To use this strategy first one needs to ask- why is it better to have Christians than Muslims in India? It is more than evident that Christians are usually much less a nuisance than Muslims in any neighbourhood. Also, since such conversion will cut into the already present high Muslim population in India, it will divide the population among these two Abrahamics. This will make it slightly easier to handle them instead of just handling Muslims. What makes few more Christians instead of Muslims even better is the fact that Christians have even lower fertility rates than Hindus and are more affected by the liberal memes of the west. So it would be easier to outbreed them than outbreed the Muslims in the long run. So, it can be established beyond doubt that having few more Christians at the cost of few less Muslims is a better deal any day.

Now comes the question on why is it beneficial for the Hindus to ask/aid Christians to convert Muslims?

1) It is like killing one snake with another. Christians have money and want to harvest more souls, so if they can evangelize Muslims, it reduces their numbers which is better for India in long run.

2) It takes the heat off from the Hindutva groups engaged in Ghar Wapsi. This trick can pit one set of Abrahamics against another without hurting the image of Hindus. International/local media which loses no chance to paint Hindutva organizations as fascists on one Ghar Wapsi incident cannot do anything if one minority groups converts another.

3) If Muslims and Christians fight over it, then Hindus do not lose anything. If Muslims get too violent, they would further erode their image as Religion of Piece!!

Having outlined the benefits of such strategy, the only remaining piece of this puzzle now is how to implement it? Using one set of Abrahamics against the other is not an easy task specially when they would always gang up against the pagans, in this case Hindus. Look below at the flow of foreign funds to NGOs in Kerala. The north districts are Muslim dominated while the southern are Hindu majority. Although all these funds are not related to conversion activity but they still give a rough hint that the prime target for conversion are southern districts like Pathanamthitta with large Hindu populations as it has received significantly higher foreign funds. 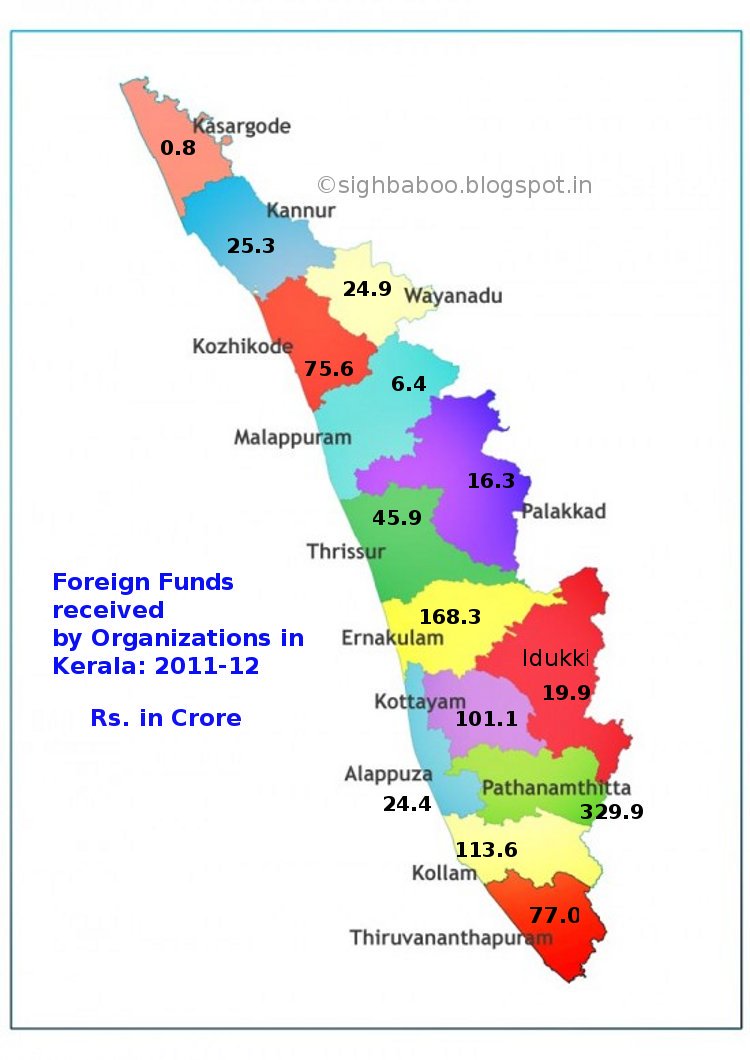 But does this mean Hindus can do nothing and lose their brothers to Christians while Muslim womb goes in overdrive? Fact is if the GoI is serious it can break this nexus and force the Church to only convert Muslims. How will that work?

2) The future conversion license will be based on the performance of these organizations in converting Muslims. If they are found to be engaged in activities of converting Hindus, their license will be revoked under one or the other pretext and their funds will be seized.

3) In return for the services of these Missionaries, state will provide them full protection during this activity i.e. strict action against Muslims who harass the foot soldiers of Church engaged in converting Muslims.

Given huge repercussions for not towing the line of GoI, any Church would prefer to make do with whatever number of souls they can harvest. Also, it is cheaper to hound Church using sleuths and use their funds rather than force the entire responsibility of Ghar Wapsi on Hindus.

1) First use evangelization and Ghar Wapsi  in low density Muslim areas so that there are low chances of riots.

2) Once the above areas are clear of Muslims, then one can resettle Hindus and converted Christians in high Muslim density areas like West Bengal and Western UP.

The above two strategies can be reformed to make them more effective over time. In an ideal scenario, given that Islam and Christianity are majority religions in the world, a sensible GoI could have banned conversion out of Hinduism and forced one child policy on Muslims. But since we live in a non-ideal secular world, probably it is the best option to make friends with the lesser enemy in the short run and let them finish off each other.