This article is written in response to the fact highlighted by Livemint today on the 50th anniversary of second rupee devaluation when Indian Rupee lost 57% of its value against Dollar and went down from Rs 4.76/dollar to Rs 7.50/dollar in one day. Read the original article here.

What triggered the crisis?

– ’65 war with Pakistan increased expenditures of GoI. Also foreign aid was cut down which resulted in less dollars coming into India thus putting pressure on foreign reserves. Indian imports were higher than exports.

– RBI could no longer guarantee fixed exchange rate due to its depleted foreign exchange reserves. Well, how could it give 1$ for every Rs 4.76, given it hardly had any dollars left in its reserves.

What did RBI do?

With one stroke of pen, it changed the exchanged rate from Rs 4.76/dollar to Rs 7.50/dollar. This eased the pressure on the exchange reserves in the short run but did not give any long run benefits. This finally culminated in a similar but more dangerous crisis in ’91 when India moved away from fixed exchange rates to flexible, thereby completely eliminating RBI headache of maintaining fixed exchange rate.

Did it help Indian economy?

In normal circumstances i.e. under market economy it is expected that exchange rate devaluation helps the economy by boosting its exports. The current currency wars between different countries like Japan and China trying to make their currency weaker are a result of this idea. But India did not gain much at that point of time because it was still a Licence Raj economy.

The mechanism is simple. In a normal market economy, where competition is encouraged more efficient firms start exporting more as the prices for their products go down immediately in the foreign market. For ex- if earlier 1$ was equal to Rs. 100 and in the new regime it changes to 1$=Rs 200. Suppose a shoe making factory could export shoes for Rs 200 while the local US manufacturer produces it for 1.5$. In such a scenario, Indian factory would not be able to export under first regime as Rs 200=2$ while its US competitor is selling shoes for 1.5$. But now the exchange rate changes and Rupee becomes weaker. The same shoes will now cost 1$ as Rs 200=1$ in the new regime. Due to exchange rate cut, overnight the Indian shoe maker became competitive as compared to the US shoemaker. This is the idea behind exchange rate devaluation.

But why did it not help India post ’66? Well, to exploit the new environment one needs domestic industry which can produce something worthwhile to export. Usually exchange rate devaluation takes some time before domestic producers learn about foreign market and get ready to export. But in the case of India in ’66, it never happened. Why? Simple. It was License Raj Bitch! India was not competitive and domestic firms were not allowed to start or ramp up their production without government nod. Since the local firms were not in a position to start new factories domestically, there was no way they could have used this devaluation to compete in the foreign market. Hence, the situation did not improve.

In a floating exchange rate regime, that India uses now, the exchange rate depends on the demand for your currency in the international market. It has reduced the role of the central bank to a very large extent except in cases where central banks can try to fudge the currency market by selling/hoarding the international currency. But this cannot go on forever and there are limitations to the use of this policy. In any case, it can be used for reducing the volatility of short term fluctuations in currency value but one should not expect to use it as a policy tool in long run. In the long run, only competitiveness of your domestic market will determine your exports and fudging the currency market cannot help forever as other countries can use the same trick, which is known as beggar thy neighbour policy. 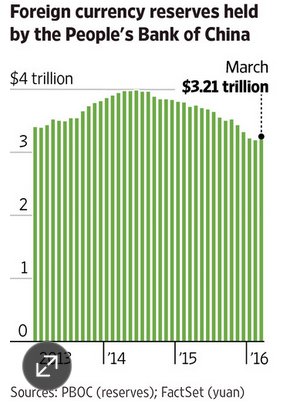 Just to give you an example look at the above figure which gives foreign exchange reserves of China. China tried to keep its currency stable and lost around 0.8 trillion $ of its reserves in the past two years i.e. roughly 20% of its total reserves. And it was not facing major crisis in the last 2 years. So in the future if it faces major crisis and foreign money starts fleeing China, it would not be able to stem this tide for a very long time. So, exchange rate controls can seem like very good idea but it would not work if you use it too much and too often. Countries need to pay more attention on their local markets.

How west cheats in the name of free trade

Let’s Hope Robots Take All of Our Jobs